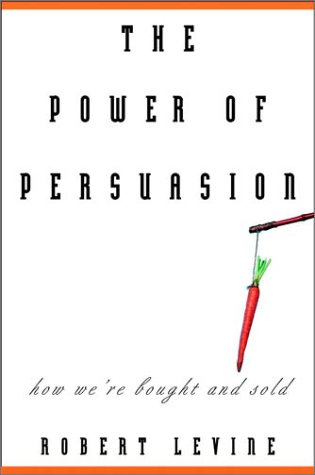 Title: The Power of Persuasion: How We’re Bought and Sold

Goodread Synopsis: There’s a sucker born every minute–don’t let it be you!

When it comes to persuasion, there are three universal truths:

1. You’re more susceptible to it than you think;
2. The most effective persuaders are the least obvious; and
3. Whether they’re selling cars or religion, professional persuaders all follow the same principles of psychology.

Stop falling prey to their ploys. The Power of Persuasion looks behind the curtain of shilling and pitch to reveal the many methods of seduction used to pull your strings and push your buttons every day.

Drawing heavily on empirical psychological evidence as well as real-world investigations and anecdotes, The Power of Persuasion arms you with the knowledge to fend off such common manipulation tactics as:

* Limited time offers: “Act fast because this fabulous opportunity won’t come around again!”
* The “Four Walls” technique: A series of carefully worded questions makes you realize that you have no good reason for not purchasing the product
* “Bait-and-switch”: A salesman quotes a price on a car missing an important feature, then finds a more suitable car at a higher price

My Thoughts: So I picked this book up due to a recommendation from a friend that had been told to read it by another friend. She hasn’t read it yet but it sounded interesting and I went into it knowing nothing beyond the title of the book.

Honestly, I almost put this book down right away, it’s interesting but a lot of the stuff talked about in the beginning of the book is stuff I’ve learned prior to reading it.  I would say go into this book open minded though because I got further into the book and became horrified at some of the stuff I learned.

I won’t go into too much depth of the book but mention a few things that stood out.

One being the whole herd mentality. People are less apt to help one another if in a large crowd, assumption being that people likely think somebody else is taking care of it, don’t know how to respond. Or they don’t want to react in fear or looking foolish.  The author suggests if your ever in need of help to actually point at people and ask them to do things because people by nature do want to help but need the extra push and as soon as one person is helping, others are likely to fall in line as order has been constructed.

I guess this is obvious, think about the things we see all the time but it’s scary to think about.  They talk about at one point a girl being murdered and something like 30 people nearby who heard but nobody reacted.  I was jaw dropped throughout this and felt a little sick.  Lets not let the crowd dictate our actions but reason.  Even if you think it might be just an angry couple nearby.  I never want to wake up the next morning thinking “what if I’d made that call, would this person be alive” that’s just such a horrifying thought.

The other thing that really stuck out with me was the power authority has over people without realizing it.  Another obvious one I guess but he talks about the Milgram Experiment and I was horrified for so many reasons.  With the political stuff going on now I really think everyone should be aware of this in ourselves and remember we all have voices and can do our part if something doesn’t feel right.  I could go into a whole long story of all the times I’ve seen this happen and all the fears I have of it not being dealt with.

Can we all hold each other accountable to do our best each day to be conscientious of what’s going on around us and have the integrity to do what we can.   If you know me and see me fall short, don’t get mad at me but I do appreciate people calling me out on it so I can recalibrate myself to be the best person possible.

All in all this book had some really wonderful parts to it but I don’t think that what I learned was really the overall intent for the book.  It makes me a little sad because personally I feel like these things are more important but I do understand the intent of the book.  I’d love to find a book more on the two things I pulled out from it though.  It was so interesting/sad/horrifying/depressing/enlightening and I’m sure I’ve got more I could take away from it.

One thought on “Review Time: The Power of Persuasion: How We’re Bought and Sold”